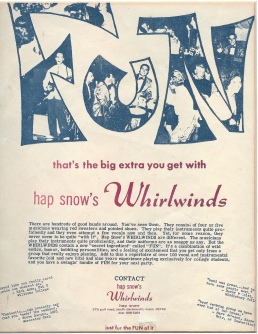 The opening song of this collection of unreleased tracks is from a rehearsal at Williams College in 1959. “Know What You’re Doin’ To Me (Oo-Ee Baby)” was written by and features pianist Art Bearon on vocals. This original tune, according to Hap Snow and Bearon family members, most likely predates Art’s time with the Whirlwinds, meaning the composition was written before he turned 18. Other band members on this recording include Harry Lewis on sax, Stefano Torossi on drums, and Snow on lead guitar. 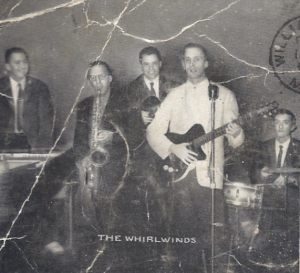 Two of the next three tracks are standards recorded at Middlebury College in 1959: “The Birth of the Blues” by Ray Henderson and “Blue Moon” by Richard Rodgers. “Where’s Harry?,” the middle tune, was recorded at Williams College in 1958, and also features the same musicians that play on the first four selections.

The final song, “Back Again,“ was written by Steve James (aka Steve Fradkin) and cut at WNEU Studio at Northeastern University in 1964, five years later than the opening four tracks. Ron Frizzell produced the standout track which is representative of the greater emphasis on vocals in the later years of the band, often involving two- or three-part harmonies. The track features James on lead vocals and rhythm guitar, Frankie Mento (aka Frank Chiumento) on drums, Michael Kaye on keyboards and vocals, Ted Pina on bass guitar, and Snow on lead guitar and vocals.

A video for Hap Snow’s Whirlwinds’ “Back Again,” composed by Steve James, is on YouTube: