Between 1958 when Hap Snow’s Whirlwinds formed at Williams College in upstate Massachusetts and 1959, the band made home recordings in several locations around New England. The 10-track demo collects unreleased tracks featuring the music of Art Bearon on piano, Harry Lewis on saxophone, Hap Snow on guitar, and Stefano Torossi on drums. 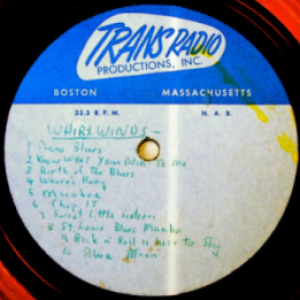 The compilation opens with two original compositions by pianist Art Bearon, “Piano Blues” and “Know What You’re Doing To Me (Oo-Ee Baby),” the latter a tune he wrote prior to joining the band. This second song is also the only vocal Bearon does as a Whirlwind.

The third demo is a cover of Ray Henderson’s instrumental, “The Birth of the Blues” which is one of many tracks to highlight the saxophone chops of Harry Lewis including the fourth original Lewis composition, “Where’s Harry?” and the sixth track, “Chop It,” a Hap Snow composition. 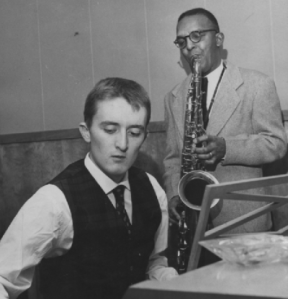 Stefano Torossi and Harry Lewis, circa 1959

Several versions of “Chop It” were recorded. An early, extended one set to photos of a trek in Nepal is online:

“Macabre,” the fifth song, is one of the earliest tunes written by band members Art Bearon, Hap Snow, and Stefano Torossi. This was later renamed and released as “Banshee” on New York’s Fleetwood Records in 1959.

A composite of two early takes of Hap Snow’s Whirlwinds’ “Macabre” and “Banshee” is located here:

A video for “Sweet Little Sixteen” using 8mm footage of Hap Snow fighting bulls in a rodeo that was shot by Ken Roy at the Maynard Rod and Gun Club in Massachusetts in 1964 is here–Roy did some part-time rodeo clowning that day, too:

The band’s main off-campus location for rehearsals and recordings after they moved from Williams was a basement studio in Weston, Massachusetts. 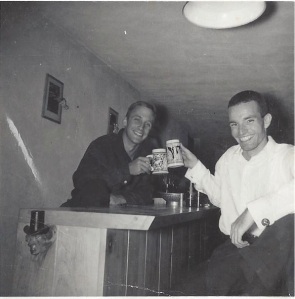 Hap Snow and Ken Roy at the band’s basement studio in Weston, Massachusetts, circa 1964

The full 10-track demo by Hap Snow’s Whirlwinds is on YouTube. Please note that several of the tracks are not of the best technical quality due to the condition of the disc.

“Ray Ban,” a 1970 I Marc 4 recording, was reissued as a limited edition vinyl 45 B-side at the end of 2013 by Italy’s Black Cat Records. Note the A-side of this single, “Sweet Beat,” is a different song than the Torossi composition of the same name found below.

Stefano Torossi’s version of “Sweet Beat” and “Sixth Dimension,” composed with Giovanni Tommaso, are here in this NC-17 pairing: 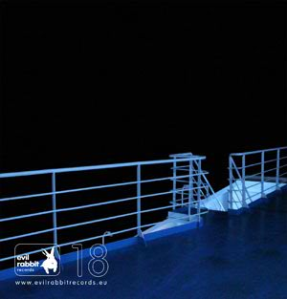 The album was recorded live in a former World War II era bunker in Bielefeld, Germany in 2010, a venue which is now a popular jazz club.